Swords & Poker Adventures is a recently published game by Konami on iOS/Android platform.  The game follows the same core concept of Swords & Poker developed by Gaia.  If you are getting started with this new game (while I don’t recommend this game due to annoyances), here are some critical tips you must know.

Grinding is big part of the game

First of all, unless you are willing to pay real money for items, be prepared to grind the same stages A LOT! This grinding aspect is somehow similar to playing real poker.  As the game does not have character development, all the powers will solely depend on the equipment available.  You can earn coins by completing stages.  Yet, the coins dropped from monsters are very few.  It is not worthwhile to kill monsters unless you want to earn the measly 5 gems from killing everything.

Getting over each zone will require to meet the paygate requirement.  It costs 10,000 coins to move from zone 1 to 2, and 20,000 coins from 2 to 3.  I’m still working on zone 3 now, and the paygate amount will definitely be more.

Therefore, it is advised to go over stages which contain fewest no. of foes.  There is one in zone 3 with only 3 monsters, but potentially earning you about 1,500 coins (including the heal chip bonus).  It is very important not to use the refill chip for healing, because it can make up for roughly 400 coins, almost 50% of the completion reward.  The amount varies depending on the level. 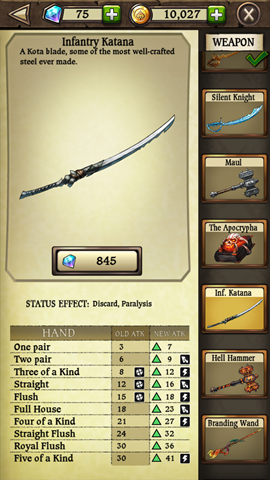 This sword looks nice, but almost 900 gems? That translates to about US$15…no way!

Due to scarcity of coins and the paygate requirement, only spend the gold on equipment when you have difficulties to move up the stage.  However, if you have sufficient coins, try to buy the best shield first.  Unlike health, the shield value will not deplete after each fight, making it a good value in a long run.

Weapons with healing effect are most preferred, because there’s no other way to heal yourself except using the refill chip.  Paralysis is also another handy effect you can consider.  Anyway, Auric Sabre, with healing effect, is the one I’m using now in zone 3.  It’s worth noting that you can get free weapons by beating the “gold monster” (forget the name) in certain maps.

Do not waste coins in those special magic.  The magic for bonus damage with multiple rows in the early stage is already powerful enough – at least up to zone 3.

Playing your cards in battle

Most of the times the play is quite straight forward.  In fact, the play is quite limited to the types of cards on board.  If you ever get stuck in a battle, you can force close the app and when you restart, you can face the same battle again.  This could be useful when you are trying your luck in certain monster at low health, but not willing to spend the refill chip.  Be cautious though: your health will often be depleted upon restart; sometimes the heath will remain the same before battle.

Wild gauge should be spent as soon as possible; because you cannot charge up for another card when the wild gauge is full.  It is best to use the meter when you can hit multiple rows.  This will build the meter faster.

Like playing the real poker, this game will somehow require a bit of luck.  Maybe it is a great way to taste the ups and downs of poker game without gambling away real money!  Anyway, as I progress through the game, I will post more updates soon.  You may wan to keep track of the official update page on Facebook at: https://www.facebook.com/SwordsandPoker 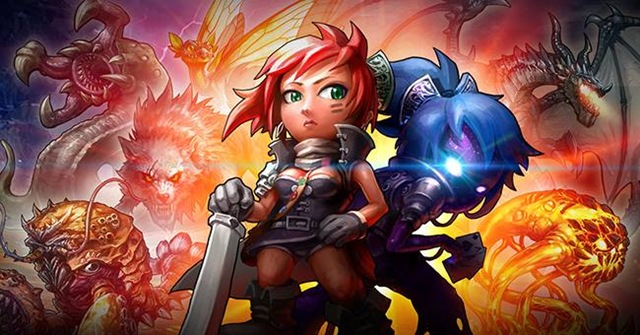